Most of this damage can be prevented by the appropriate use of moisture absorbing products like container desiccants for shipping containers. They will not only help to prevent and limit moisture condensation in the container, but will also work all the time to help to prevent serious cargo damage caused by prolonged periods of elevated humidity.

Moisture damage often seems unpredictable. After five containers with no problem, there may be one that is a disaster. This is not due to any mysterious causes, but is a consequence of the exponential character of most of the underlying processes. This means that a small change in conditions can have a great effect on the outcome. 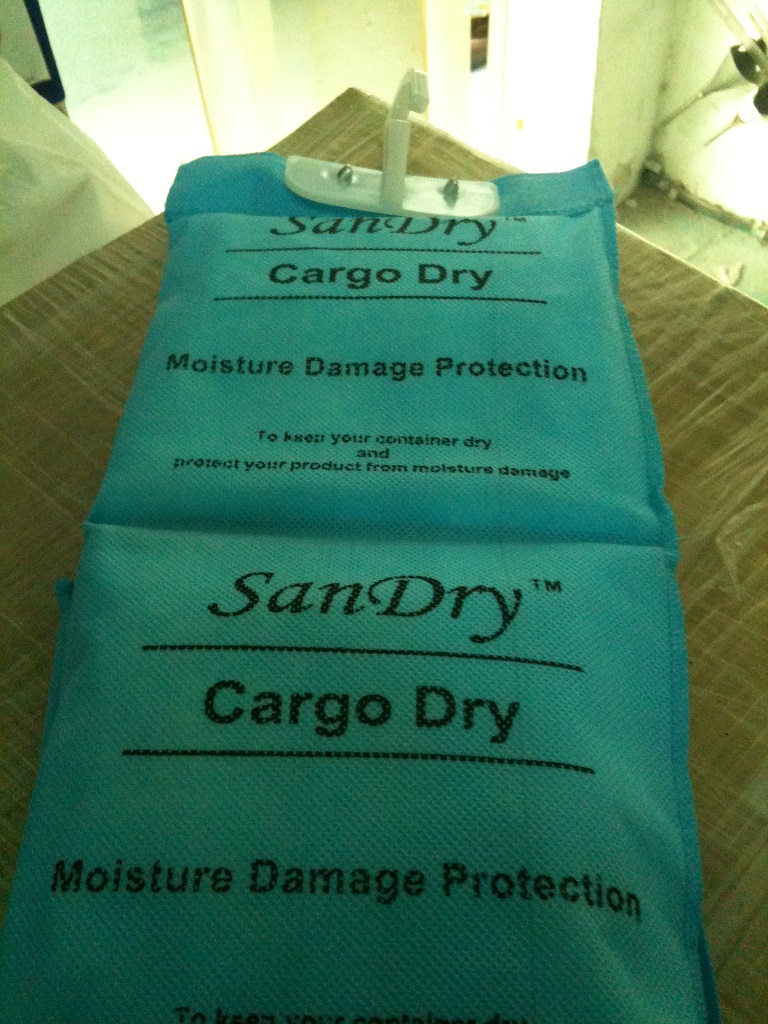 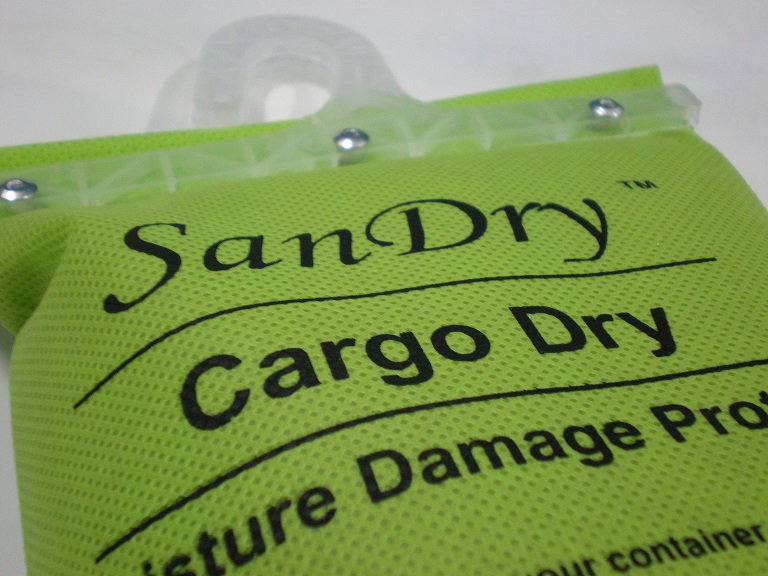 There is a maximum amount of moisture that air at a particular temperature can hold. Any excess moisture beyond this amount will be condensed as a fog of small droplets floating in the air or as dew on a nearby cold surface.
Warm air can hold more moisture than cold air. When warm air cool down it becomes more humid, even though there is no change in the amount of moisture the air contains. If the temperature drops enough condensation will occur.

How humid the air is depends on its Relative Humidity (RH). This is quite simply the percentage of moisture held in the air out of the maximum that air of that temperature could hold. Entirely dry air has RH 0 . Maximally humid air has an RH of 100.

There is rarely any moisture damage if RH is less than 60-70%.

As a rough rule of thumb the amount of moisture the air can hold doubles for every 10 C over “normal” temperatures. If for instance air of 20 C and RH 50% is cooled to 10 C, the RH will reach 100%. Any further cooling would cause immediate condensation. If the air was then heated, the RH would drop below 100% and any condensation that had happened would over time reevaporate back into the air.


The problem is quite different when the container holds a cargo that contains tons of water, such as a cargo of wood, agricultural products or paper. If any significant proportion of this moisture were released into the air, any desiccants would be overwhelmed. The trick is of course to try to make sure that the moisture stays in the cargo.

It is not possible to really control the moisture within a container loaded with a moist cargo, but from a good understanding of the interaction between the cargos, the air and the Container desiccants it is possible to manage conditions in a way to prevent damage.

If any moisture containing cargo is put into an enclosed space and left at a constant temperature for a length of time, water will evaporate or be absorbed by the cargo until an equilibrium is established at a characteristic RH level. This level depends on the particular cargo, its moisture content and the temperature. So long as there is any amount of liquid water in the container, the RH will essentially stay at 100%. For many agricultural products at normal moisture content such as peanuts, the equilibrium RH is typically 70-80%. 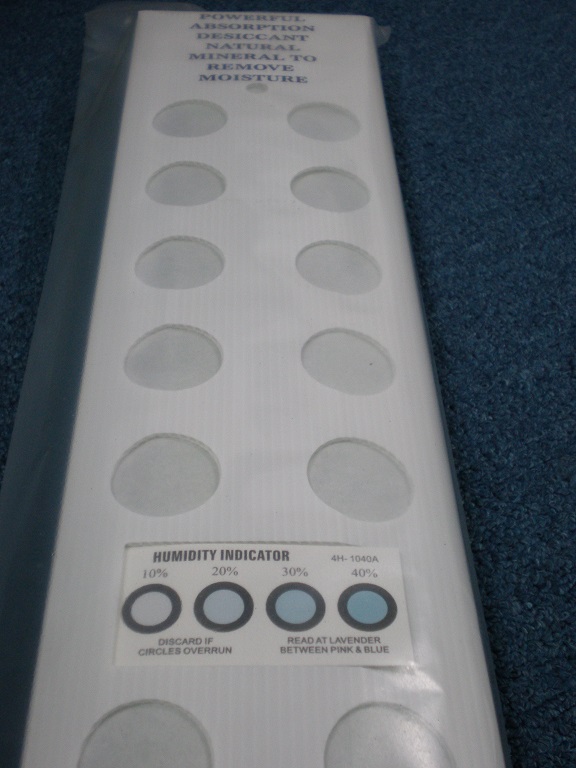 The moisture processes in the air happen very quickly. The interaction between the air and the cargo happen more slowly, over a period of time. How quickly a cargo evaporates or absorbs moisture depends strongly on how far the air RH is from the equilibrium RH and on the temperature. In fact this dependence has an exponential character.

Protecting the cargo from condensation damage


If the cargo is reasonably dry, it will have a fairly low equilibrium RH (< 80%) and will evaporate moisture only slowly into the surrounding air. Under constant temperature conditions there is little or no risk of damage to the cargo.

If, however, there should be a rapid fall in temperature, the RH in the air will immediately increase, perhaps to 100%, and condensation will occur. In a container the condensation will happen on the coolest available surface, which is often the ceiling. It will take some time for the thin film of condensation to coalesce into droplets and drip onto the cargo.

The condensation might indeed dry up before any damage is caused. Container desiccant would help prevent damage from condensation, both by limiting the amount of condensation and by helping to dry it up before it could drip on the cargo. During a condensation event RH is at or near 100%, and the Articles

Most of this damage can be prevented by the appropriate use of moisture absorbing products like container desiccants for shipping containers. They will not only help to prevent and limit moisture condensation in the container, but will also work all the time to help to prevent serious cargo damage caused by prolonged periods of elevated humidity. 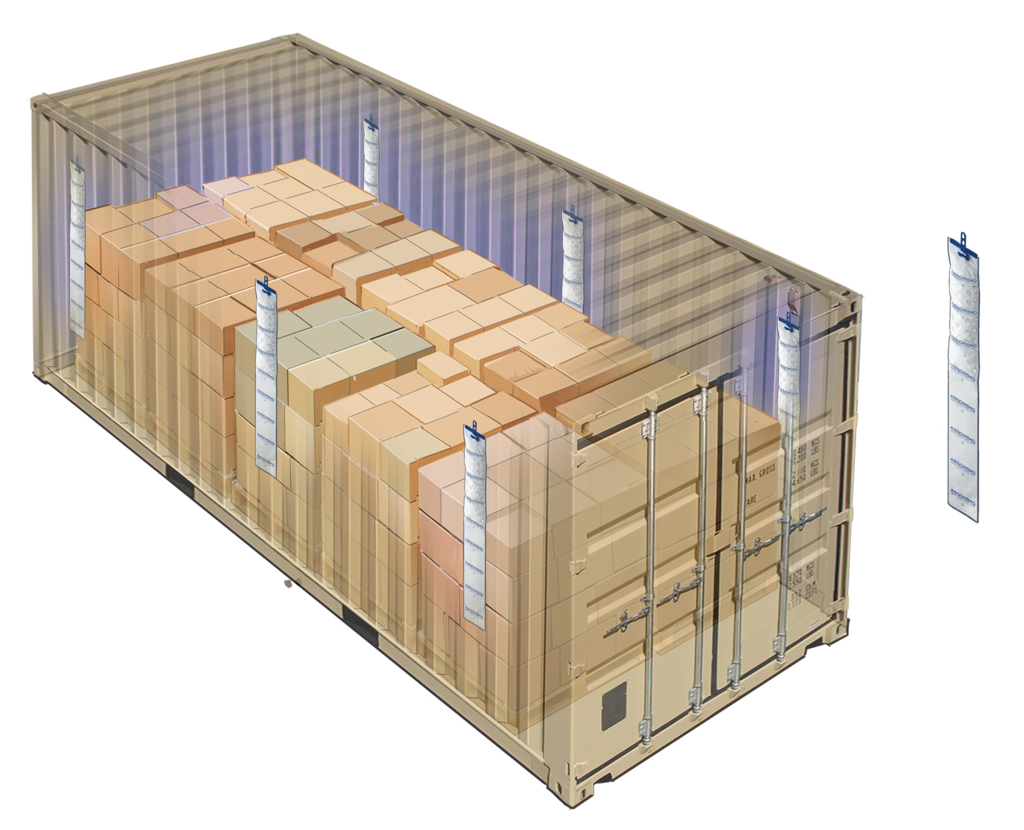 
The most visible kind of moisture problems happens as a result of falling temperature outside the container. The container wall or ceiling becomes colder than the air and moisture condenses as a thin film on the coldest surface. Eventually droplets of water may form and drip onto the cargo or run down the walls. Container sweat is a result of a temperature change.

Cargo sweat happens when warm air rapidly cools over a cold cargo. Such condensation onto the cargo is often invisible. The moisture is absorbed into the carton, goods or wood before there are ever any visible droplets of water. Moisture absorption by the cargo in fact happens as a result of high levels of humidity, even if the point of condensation is not reached.

Warm and humid air can usually be formed within a container only when there is a difference in temperature between different parts of a cargo that contain a source of moisture. In a container warming up after a cold night the outer part of the cargo may warm up first and cause warm moist air to diffuse into the centre.

Cargo sweat commonly occurs during sea voyages between different climate zones. It may take weeks for temperatures to become equal within a cargo. During this time warm moist air from one part of the cargo will move into the cooler part and create prolonged periods of cargo sweating or elevated levels of humidity.

In a container with a completely dry cargo, moisture is a limited problem. Typically all the air in a 20 ft container will hold less than a liter of moisture. The exchange of air and moisture with the surroundings is very limited during the voyage when the container is in a good condition. A small number of Container desiccants will absorb the moisture in the air and prevent any moisture problems.

However, few cargoes are entirely dry. Container floors, pallets, crates, cartons and other packaging materials will certainly contain moisture that may be released into the air and cause problems. Yet if the cargo and packaging materials are reasonably dry, the amount of moisture released will still be within the absorption capacity of a reasonable number of container desiccant. This will not completely guarantee that condensation does not occur, but the container desiccant will limit and dry up any condensation in such a way that damage to the cargo is unlikely.

Protecting the cargo from extended periods of high RH


Cargo damage from condensation is somehow obvious. Yet much, or even most cargo damage, happen as a result of prolonged periods of RH above 80%, without any condensation. This can happen throughout a cargo with a high moisture content, or it can happen in a portion of a cargo as a result of temperature gradients. A container of agricultural products may contain tons of moisture. It is obvious that no reasonable number of absorber can handle more than a small fraction of this amount, were it to be released. Fortunately this is not necessary. 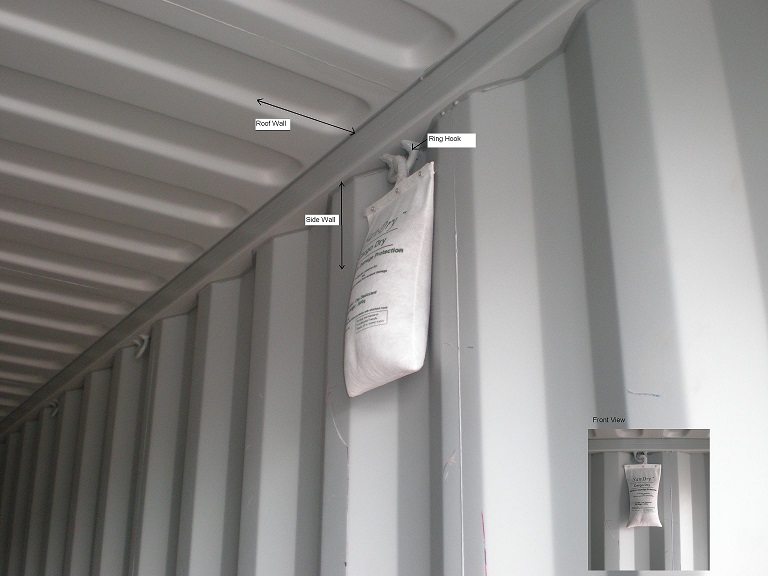 Were we on the other hand to attempt to lower the RH in the air more substantially, the evaporation rate from the cargo would quickly increase and the number of poles required to match it would soon become impractical. In fact we would soon come to a point where adding additional poles has no effect but to increase the flow of moisture from the cargo to the container desiccant, without any significant reduction of the RH.

While it is thus relatively easy to use container desiccant to lower the RH in the air in a container of say agricultural products by say 10 percentage points, it may be virtually impossible to lower it by say 20 percentage points. Yet it will often make all the difference to the cargo if the RH is kept at 75-80% instead of being allowed to rise to say 85%. The exponential character of the relevant processes, makes it possible to manage the moisture condition of tons of cargo with a few kilos of Container desiccants are absorbing at their maximum rate.

To gain an idea of the magnitudes, it may be noted that there is typically 10-15 m2 of air in a loaded 20 ft container. If the temperature should suddenly drop from 30C to 20C something less than half a Kg of water could condense on the ceiling. Some portion of this may eventually drip onto the cargo. The time frame is on the order of hours. If the container is equipped with say 6 container desiccant, these will absorb on the order of 100g per hour, and it is clear that they will have a real effect on limiting the damage from condensation.

Tests where the cargo has been covered with clean sheets of cardboard (a drop of condensation will leave a discoloration even after it has dried up), shows that clear condensation events as detected by data-loggers do not necessarily result in much dripping in the presence of container desiccant.
Ventilation Report
Cargo Care